Today we will see the basic hello world program in different Programming Language. This will not a logical post it’s just a basic view of different programming language for general knowledge.

While Small test program existed since the development of the programmable computers, the tradition of using the phrase “Hello, World!” as a test message was influenced by an example program in the seminal book “The C Programming Language”. The Example program from that book prints “hello, world” (without capital letters or exclamation mark), and was inherited from a 1974 Bell Laboratories internal memorandum by Brian Kernighan, “Programming in C: A Tutorial, which contains the first known version. the first known instance of the usage of the word “hello” and “world” together in computer literature occurred earlier, in Kernighan’s 1972 Tutorial “Introduction to the Language B”.
source: https://en.wikipedia.org/wiki/%22Hello,_World!%22_program

C was originally developed by Dennis Ritchie between 1969 and 1973 at Bell Labs and used to re-implement the Unix operating system. It has since become one of the most widely used programming languages of all time, with C compilers from various vendors available for the majority of existing computer architectures and operating systems. C has been standardized by the American National Standards Institute (ANSI) since 1989 (see ANSI C) and subsequently by the International Organization for Standardization (ISO).
Read More

The D programming language is an object-oriented, imperative, multi-paradigm system programming language created by Walter Bright of Digital Mars and released in 2001. Bright was joined in the design and development effort in 2007 by Andrei Alexandrescu. Though it originated as a re-engineering of C++, D is a distinct language, having redesigned some core C++ features while also taking inspiration from other languages, notably Java, Python, Ruby, C#, and Eiffel.
Read More

Boo is an object-oriented, statically typed, general-purpose programming language that seeks to make use of the Common Language Infrastructure’s support for Unicode, internationalization, and web applications, while using a Python-inspired syntax and a special focus on language and compiler extensibility. Some features of note include type inference, generators, multimethods, optional duck typing, macros, true closures, currying, and first-class functions.

Apache Groovy is an object-oriented programming language for the Java platform. It is a dynamic language with features similar to those of Python, Ruby, Perl, and Smalltalk. It can be used as a scripting language for the Java Platform, is dynamically compiled to Java virtual machine (JVM) bytecode, and interoperates with other Java code and libraries. Groovy uses a Java-like curly-bracket syntax. Most Java code is also syntactically valid Groovy, although semantics may be different.

Perl is a family of high-level, general-purpose, interpreted, dynamic programming languages. The languages in this family include Perl 5 and Perl 6.
Though Perl is not officially an acronym, there are various backronyms in use, including “Practical Extraction and Reporting Language”. Perl was originally developed by Larry Wall in 1987 as a general-purpose Unix scripting language to make report processing easier.

Java is a general-purpose computer programming language that is concurrent, class-based, object-oriented, and specifically designed to have as few implementation dependencies as possible. It is intended to let application developers “write once, run anywhere” (WORA), meaning that compiled Java code can run on all platforms that support Java without the need for recompilation.

C++ was designed with a bias toward system programming and embedded, resource-constrained and large systems, with performance, efficiency and flexibility of use as its design highlights. C++ has also been found useful in many other contexts, with key strengths being software infrastructure and resource-constrained applications, including desktop applications, servers (e.g. e-commerce, web search or SQL servers), and performance-critical applications (e.g. telephone switches or space probes)

Lua was originally designed in 1993 as a language for extending software applications to meet the increasing demand for customization at the time. It provided the basic facilities of most procedural programming languages, but more complicated or domain-specific features were not included; rather, it included mechanisms for extending the language, allowing programmers to implement such features.

According to its creator, Ruby was influenced by Perl, Smalltalk, Eiffel, Ada, and Lisp. It supports multiple programming paradigms, including functional, object-oriented, and imperative. It also has a dynamic type system and automatic memory management.

JavaScript is a programming language that adds interactivity to your website (for example: games, responses when buttons are pressed or data entered in forms, dynamic styling, animation). This article helps you get started with this exciting language and gives you an idea of what is possible.

Tcl (Tool Command Language) is a dynamic programming/scripting language based on concepts of Lisp, C, and Unix shells. It can be used interactively, or by running scripts (programs) which can use a package system for structuring, hence allowing to do much with little code. Tcl is available for Linux, Windows, Mac OS X, as well as other platforms, as open-source software under BSD-like license, or as pre-built binaries.

Python is a widely used high-level programming language for general-purpose programming, created by Guido van Rossum and first released in 1991. An interpreted language, Python has a design philosophy that emphasizes code readability (notably using whitespace indentation to delimit code blocks rather than curly brackets or keywords), and a syntax that allows programmers to express concepts in fewer lines of code than might be used in languages such as C++ or Java

R is an open source programming language and software environment for statistical computing and graphics that is supported by the R Foundation for Statistical Computing. The R language is widely used among statisticians and data miners for developing statistical software and data analysis

Brainfuck is an esoteric programming language created in 1993 by Urban Müller, and notable for its extreme minimalism.The language consists of only eight simple commands and an instruction pointer. While it is fully Turing-complete, it is not intended for practical use, but to challenge and amuse programmers. Brainfuck simply requires one to break commands into microscopic steps.
Read More 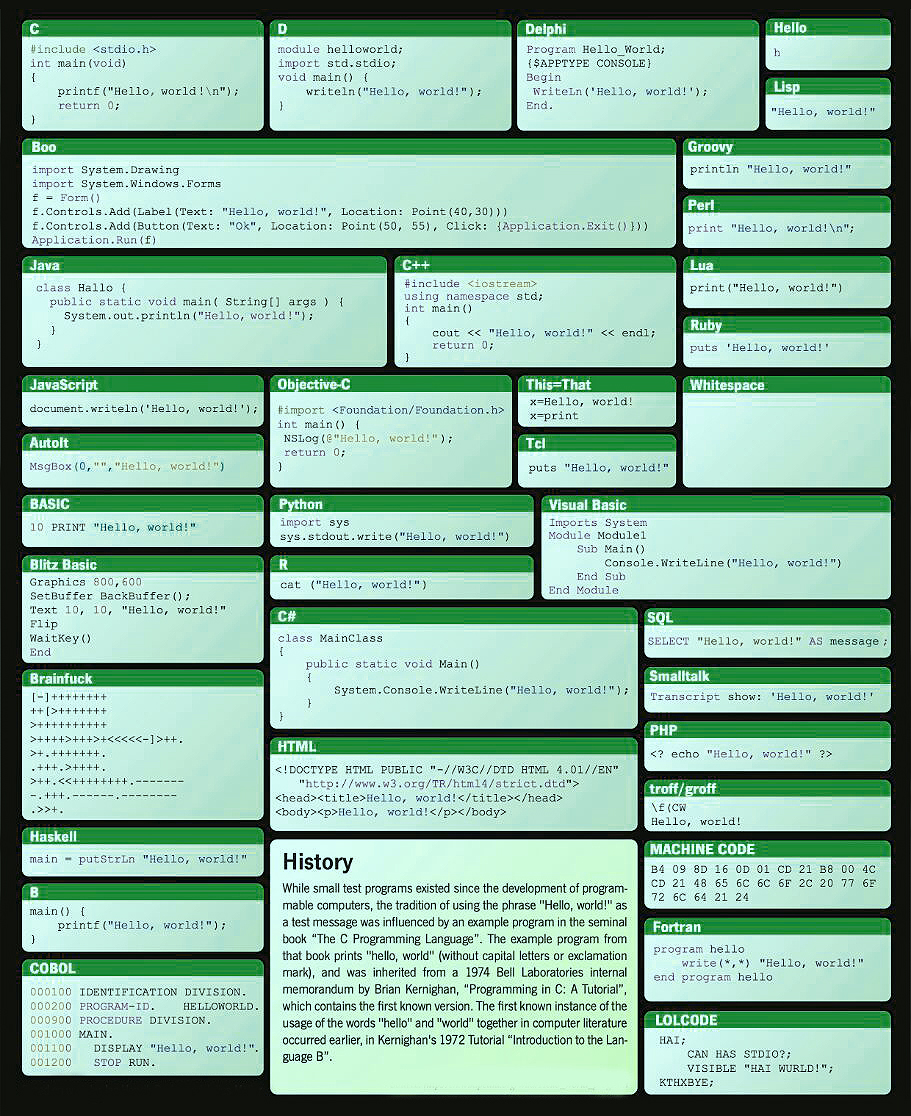 This site uses Akismet to reduce spam. Learn how your comment data is processed.

We use cookies in order to give you the best possible experience on our website. By continuing to use this site, you agree to our use of cookies.
Accept